Now Sea Trout Fyn, Fyn’s Laksefisk and DTU-Aqua are starting the history’s largest research of marking trout’s in Denmark. From spring 2023, ALL stocked trout smolts on Funen and the islands of Langeland and Ærø will be marked. In the future, the tagged fish will be caught by anglers and included in a data collection that will give a clear picture of the effects of the releases.

Sea Trout Fyn is a cross-municipal collaborative cooperation project that brings together all 10 municipalities on Funen, Langeland and Ærø for a joint sustainable effort, with the aim of improving the environmental conditions in the water systems, providing a more versatile nature with more fish, securing more visitors tourists and thereby contribute to more local jobs and an increase in turnover in the local businesses, which benefits the remote communities and the shoulder tourism seasons.

One of the main activities in Sea Trout Fyn has for many years been the release of seatrout smolt. These have been reared at Fyns Laksefisk throughout the duration of the project. The exposed fish are the offspring of wild seatrout, which are caught every year by electrofishing in the Funen streams by Fynsk Laksefisk in close cooperation with several sportfishing associations and many volunteers.

The marking of the many trout is also to take place at Fyns Laksefisk. Fyns Laksefisk is a modern land-based fish farm, which forms the perfect framework for an efficient, controlled, and professional marking process. The marking is done manually, by cutting off the trout’s adipose fin, which does not grow back. The adipose fin clipping is a quick process, where the trout do not suffer harm, they will be stunned before starting the procedure. adipose fin clipping is a well-known marking method, it is also known in Denmark from the salmon releases in West Jutland, and in Oregon, US, where 40 million trout’s are marked by adipose fin removal each year. 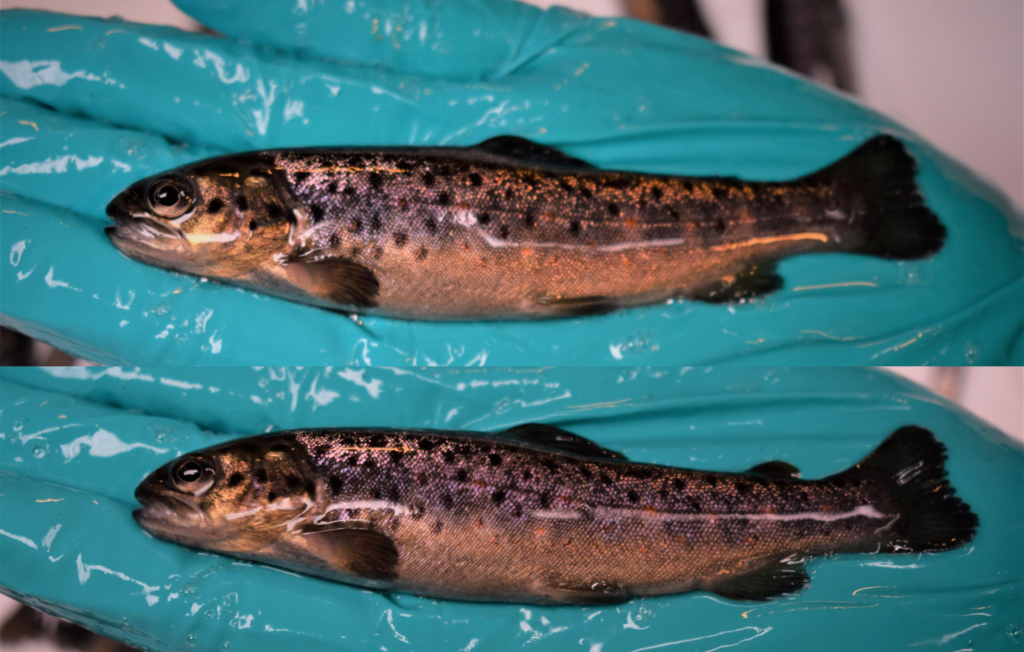 Above, a fish without adipose fin. Under, a trout with

Sea trout Funen releases over 350,000 Seat rout in the river mouths of several streams on Funen, Langeland and Ærø every year. The intention with the releases is to ensure a large sea trout population, which supports recreational angling, as well as to reduce the pressure on the wild trout populations.

One of Sea Trout Funen’s missions is to create the most optimal conditions for the sea trout, and it is our goal that the wild trout populations on Funen must in the future be sustainably self-reproducing, without the need for releases – but we are not there yet, and therefore the smolt releases are necessary. Sea trout Funen is not alone in the fish stocks on Funen and the islands. Trout smolt financed by the Fishing License Funds are also released, these trout will also be tagged in 2023, since with the experiment we want to gather more general knowledge about the value of the releases. In the future, it will be able to obtain important information on the number of stocked seatrouts that reach the minimum size and are caught by anglers; migration patterns; as well as the percentage distribution between wild and stocked seatrouts. 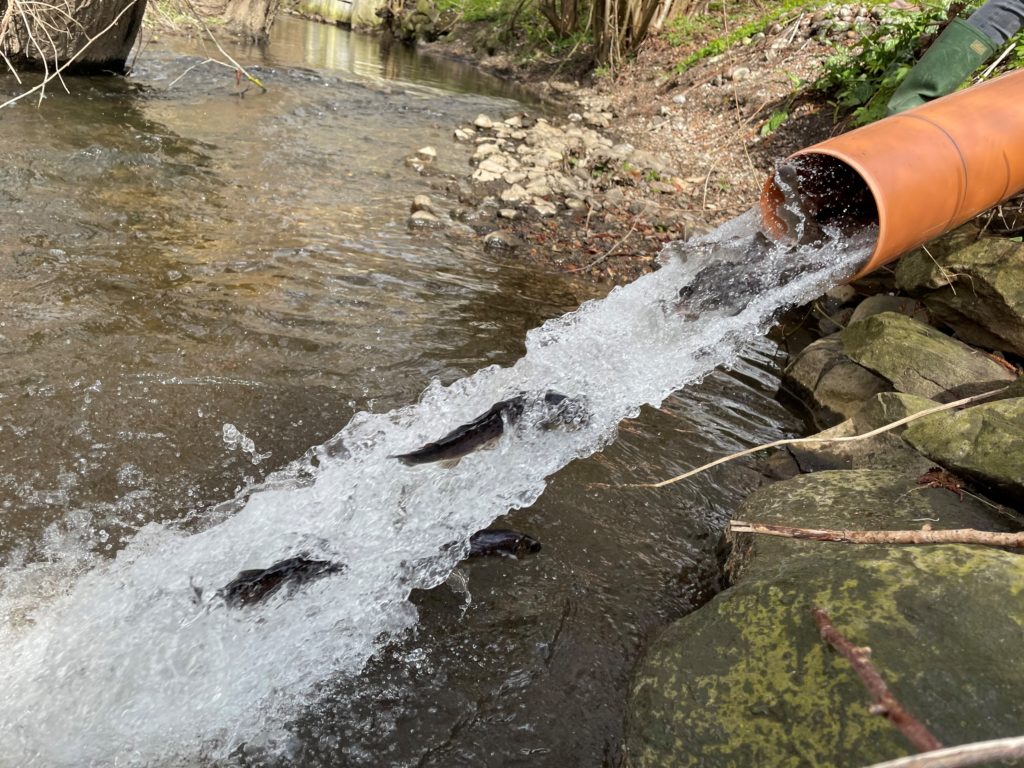 Facts:
Sea Trout Fyn does not just release fish, but also supports the restoration of streams so that more wild fish come. Stock analyzes from DTU Aqua show that the trout density in the Funen streams has tripled since 1990.

Datacollection will be performed in close collaboration with DTU-Aqua, Fyns Laksefisk and the local sports fishermens around Funen, Langeland and Ærø

“Although smolt marking is a known procedure, the scope of this research project is enormous. Both the data and the results are extremely important and relevant for the efficiency of Sea Trout Fyn’s future efforts, and it is something that has been on Sea Trout Fyn’s drawing board for many years.” Søren Bay – Project manager – Sea Trout Fyn

If you ask the anglers, there are many indications that the smolt releases on Funen and the islands have contributed to an increased population of sea trout along the Funen coasts and in the Funen streams over the years. Many believe that the stocking has had a positive impact on recreational angling and sport fishing, but it has never been investigated how many stocked sea trout are caught by anglers annually, and how large a proportion of the seatrout catches on Funen and the islands are made up of the stocked trout’s. Therefore, it is extremely relevant that a project initiated by Fyns Laksefisk, DTU Aqua and Sea Trout Fyn is now being initiated, so that reliable knowledge can be gathered. A knowledge that will be able to support future restocking.

“Our actions must create results. Results must be able to be documented and be measurable.” – Christian Thomsen, PR & Marketing Coordinator – Sea Trout Fyn. 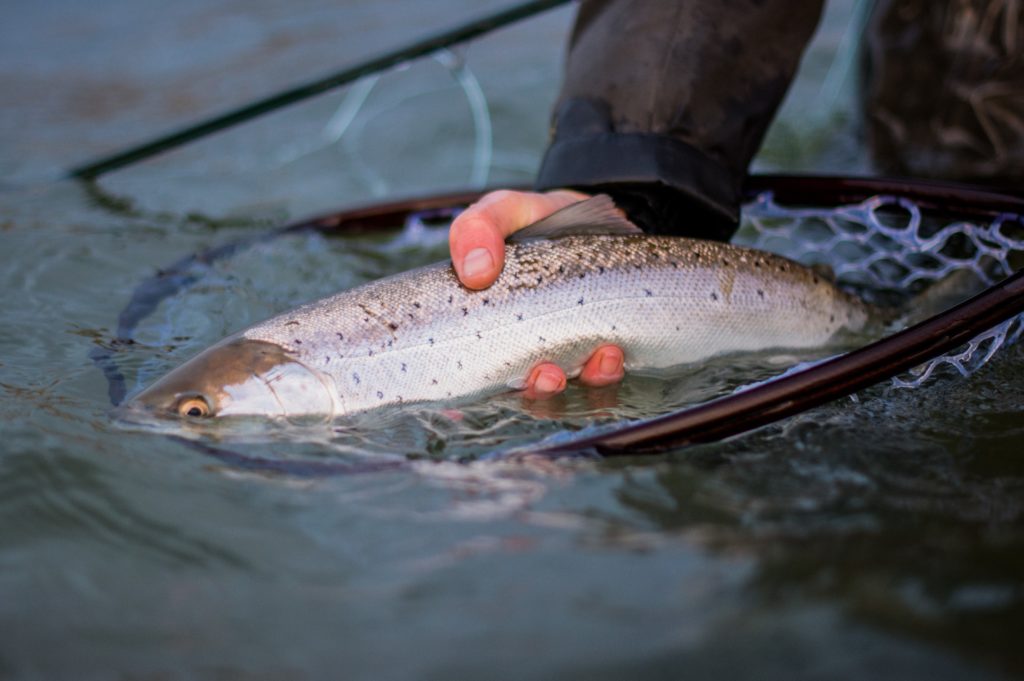 The anglers around Funen are expected to play an important role in connection with the study.

The data collection will be carried out in collaboration with the anglers and DTU Aqua. DTU Aqua leads a citizen science project “Fangstjournalen” where, over several years, anglers have been able to contribute knowledge about the Danish fish stocks by reporting data from their fishing trips via an app called “Fangstjournalen”.

From and including 2023, it will be possible to indicate in the app whether a sea trout catch is with or without adipose fins, and of course the usual information about the size of the fish, place of capture, etc. In this way, we can find out what proportion of the released and tagged sea trout are constituting. The hope is that all anglers who fish on Funen and the Islands will contribute data to the study by reporting their fishing trips and catches of sea trout, both with and without adipose fins. To further strengthen the data base, a “key team” of skilled anglers will also be put together, who will report fishing trips and catches to the “Catch Journal”.

The research project implies that the releases on Funen up to and including 2025 will consist of 100% marked sea trout smolts. We expect that the first marked sea trout will be caught and reported in the “Fangstjournalen” during 2023, and the first will be above the minimum size at the beginning of 2024. A status note will be prepared annually, but a final report is an expected to be completed until 2028, as gathering sufficient data is a time-consuming process.

“In Denmark, annually approx. 3.5 million DKK worth of smolts are being restocked. under the Fish Care. Our knowledge of the effect of releases, including to what extent they contribute to improving angling, is sparse. Therefore, this study is particularly relevant, not only for Sea Trout Funen, but also for the Fisheries Agency as a whole. Anders Koed – Professor and Head of Section – DTU Aqua

The marking of stocked fish will also be able to contribute with more than just research. As described, one of Sea Trout Fyn’s objectives is to strengthen the original wild population of sea trout on Funen and the islands. By marking released trout’s, we can make it easy and simple for the angler to make an ethical and independent choice to release the wild sea trout with adipose fins that they may catch, and if you like – take the sea trout home without it. It could accelerate the process of strengthening the wild sea trout stocks, thereby ensuring an even more sustainable angling. Sea Trout Fyn will regularly publish content regarding the progress of the project and introductions to e.g. how to register data in the Catch Journal’s app, and a lot of other exciting content.